Laurie, a French volunteer at “La Città dell’Utopia”, in Rome, tells us about her experience during the online training “Chapter: Anti-Fascism on the Spotlight”, organized as part of the project “Challenging Propaganda through Remembrance”

«Well, for me, what is fascism… The regime of Mussolini during the war, close to Hitler and Nazism, and that’s it, right? » Here is, more or less, my thought some weeks ago, as a young French “millennial” that is living in Rome for 7 months. Let me tell you how being part of the European project “Chapter: Challenging Propaganda Through Remembrance” is making me change my a bit naive opinion…

Indeed, the project “Chapter”, co-financed by the European Program for Citizens, aims to study fascist propaganda used during history, in order to compare it with the one of the neo-fascists and far-right groups today in Europe. The project is based on the idea that propaganda is the milestone of the totalitarian regimes, that searches to reduce people to a “not thinking and manipulable sheep’s herd”. This being said, us, as participants of the project coming from different parts of Europe, will meet each other in order to propose some methods and tools to face this propaganda, and to propose an anti-fascist discourse. We will do it through media, with a website, but also with an online campaign that will be developed in parallel with diverse activities in our countries during the next months, in order to create groups of active citizenship around Europe. So, when I say “us”, I am also speaking about “you” the person that is reading this, and that could be part of it!

In order to prepare ourselves for these activities, we had a first meeting through our screens, during 10 days in April. This training compiled a big part of research, during which I enriched my historical and conceptual knowledge about fascism and anti-fascism, propaganda… It seems simple concepts that we learn at school, however can you easily explain the difference between nationalism and fascism? Have you ever asked yourself if propaganda is always “mean”, and how to differentiate it from education? At the same time, we studied the reality of far-right movements and anti-fascist movements in our different local contexts. Being a French living in Italia, I was very interested to see how these questions are lived and asked in these 2 countries. However, this training helped me to learn how the situation is going in Bulgaria, Greece, Austria, Catalonia, Germany, Poland, Ireland ecc…! The research was based on the idea that, in order to fight something, you have to know it well.

But the strength of this training, according to me, was not only to study the problems caused by the increase of the far-right movements today. On the contrary, we exchanged also a lot on the methods to propose a counterpropaganda, studying, making activities and role games, learning from the italian feminist movement Non Una Di Meno, or from the action of the informative collective of DINAMOpress. Two examples very concrete and strong of counter-discourse, that are created on, and through, the construction of an active anti-fascist community.

The strength of the community, in fine, is probably one of the strongest lessons that I learned from this training. Even if it was on Zoom and we were in diverse countries, the group spirit was very benevolent, and has allowed us to adventure ourselves in topics that can be touchy. The small games, the more informal discussions, the feedback in small groups, permitted us to take care of each other even though we were distant, and I swear that I didn’t think that I could be emotionally touched like that in front of my computer when the training ended!

Well, to learn from the past, in order to propose alternative methods at the neo-fascist propaganda, through media, campaigns and information, creating a community and taking care of us; these are the roots of this project, and I can’t wait to continue. We are active! With the first Remembrance Week in Rome, in mid-june! So stay tuned for the following of this amazing and moving story, and I told you only the beginning, the first Chapter… 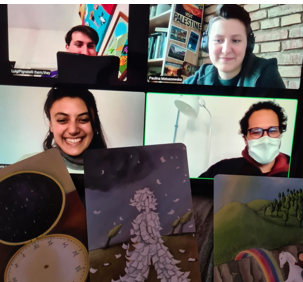