Laurie tells us about her experience in the project, especially focusing on the Remembrance Week in Rome, her motivations, her role as a Remembrance messenger, what she learned, her encounters, discoveries and much more.

Both of them tell us about their experiences in the project, their motivations, their role as a Remembrance messenger, what they learned, their encounters, discoveries and much more. 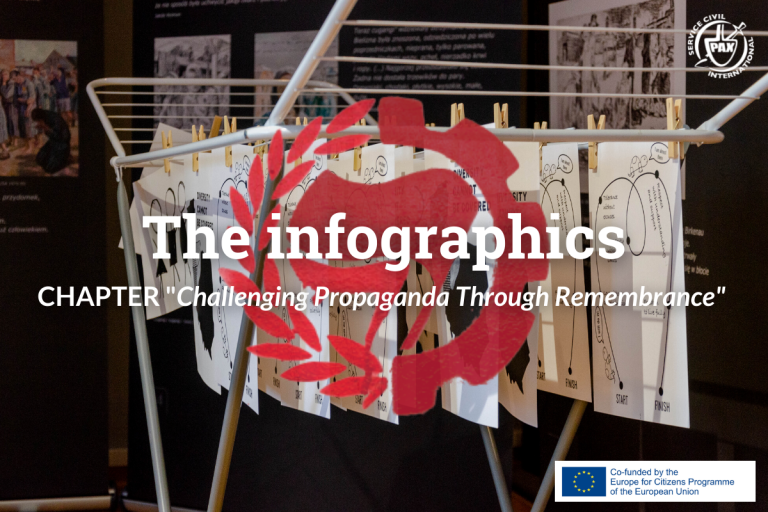 This set of infographics has been realized thanks to the Remembrance Messengers and all participants to the Remembrance Weeks in Greece, Italy, Poland, Austria and Catalunya. This is an output of the field researches implemented during the Remembrance Weeks on 10 topics identified at the beginning of the activities. The goal was to analyze the propaganda built by the far-right movements throughout history with relation to these topics: fear, propaganda, gender, youth, freedom of speech, nationalism, history, normalization, social frustration, hate crimes. They have been created through the collection of visual, spoken and read testimonies. The result it’s all to be watched and read.

The first Remembrance Week took place in Rome, Italy, from the 14th to the 23rd of June. During this week, the participants developed two infographics related to the topics of youth and freedom of speech. The infographics introduce different ways of expressions, question the use of social media and reflect on what makes the youth act.

The second Remembrance Week was hold in Warsaw, Poland, from the 25th of June to the 4th of July. This Remembrance Week focused on the topics of hate crimes and history with the result of three infographics. The infographics consist of printed manifestos about topics that, according to the participants, need peoples’ attention including reflections on the impact of words, diversity and the values that humanity needs. Check them out here. 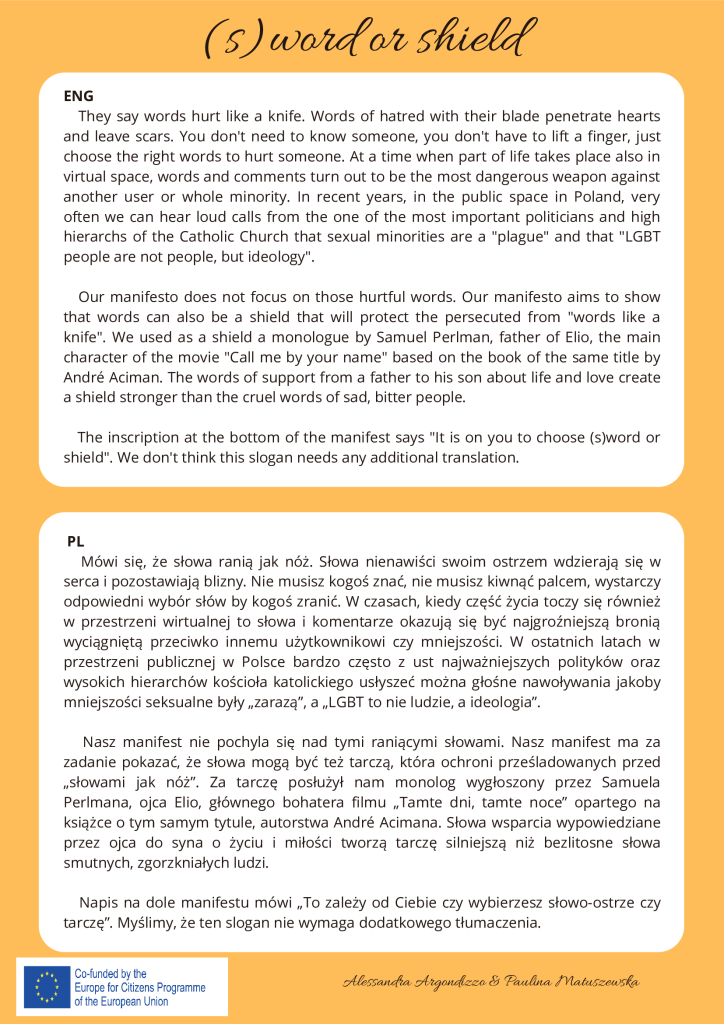 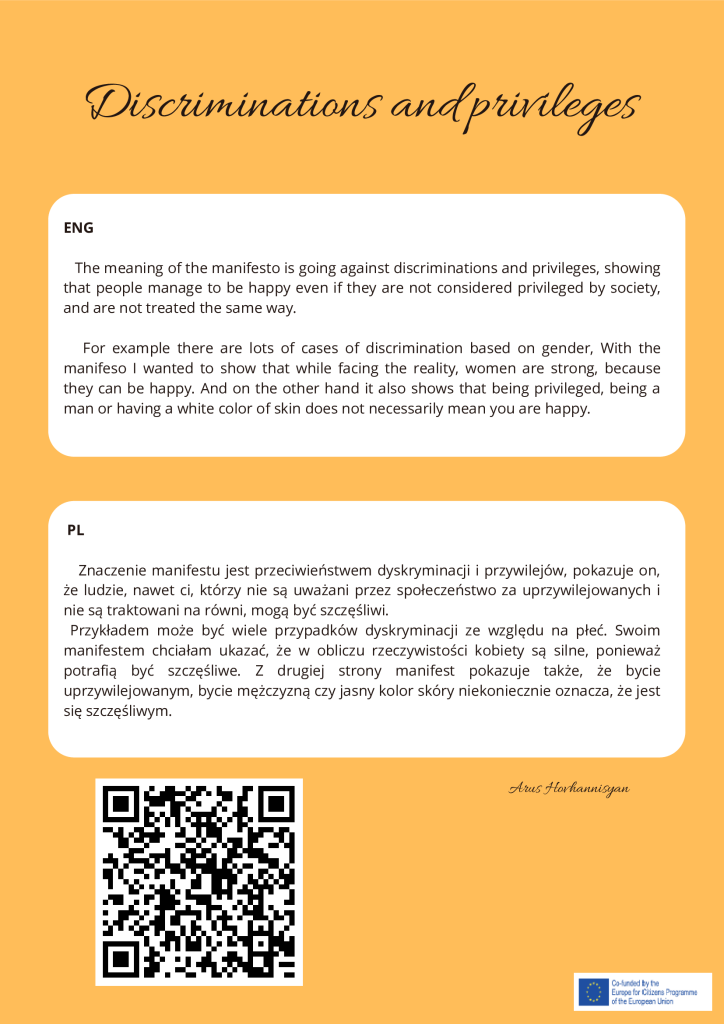 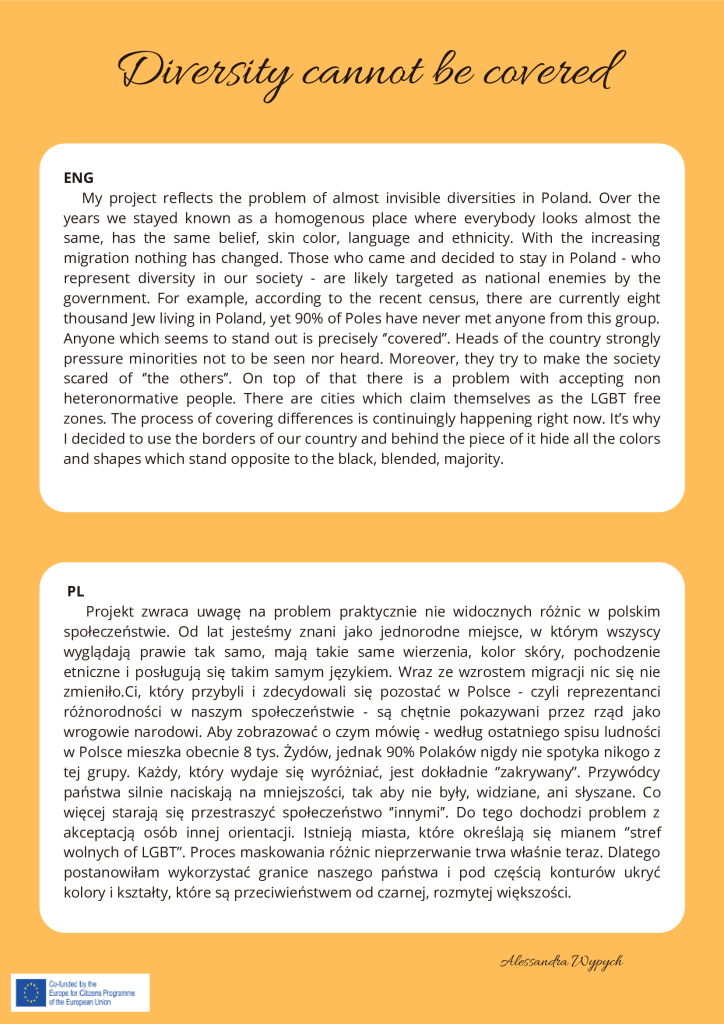 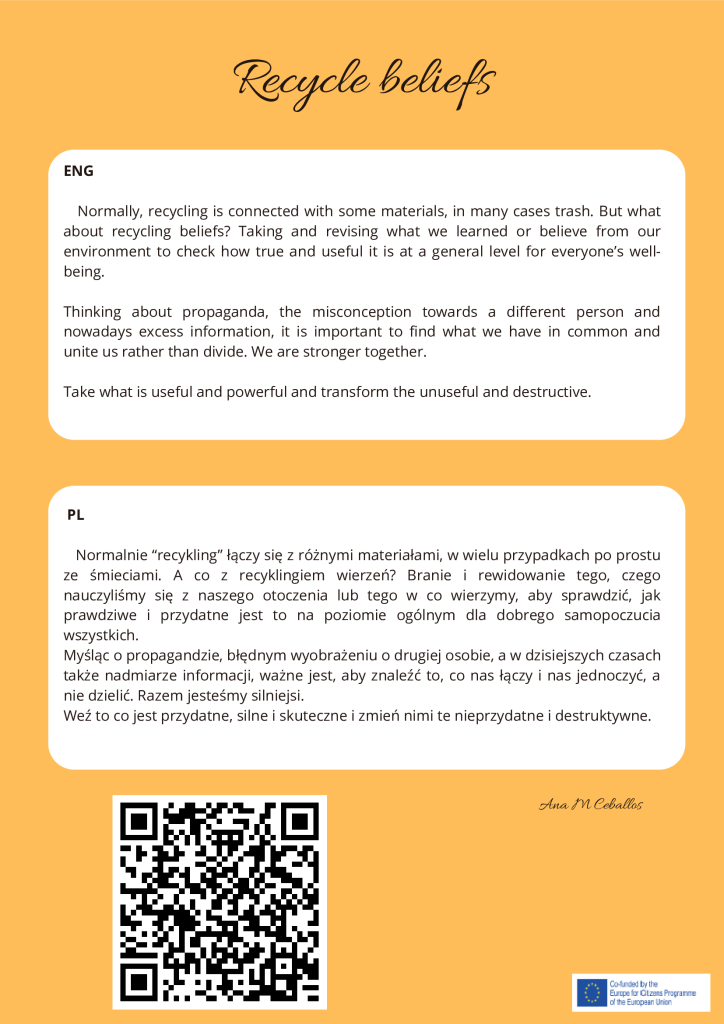 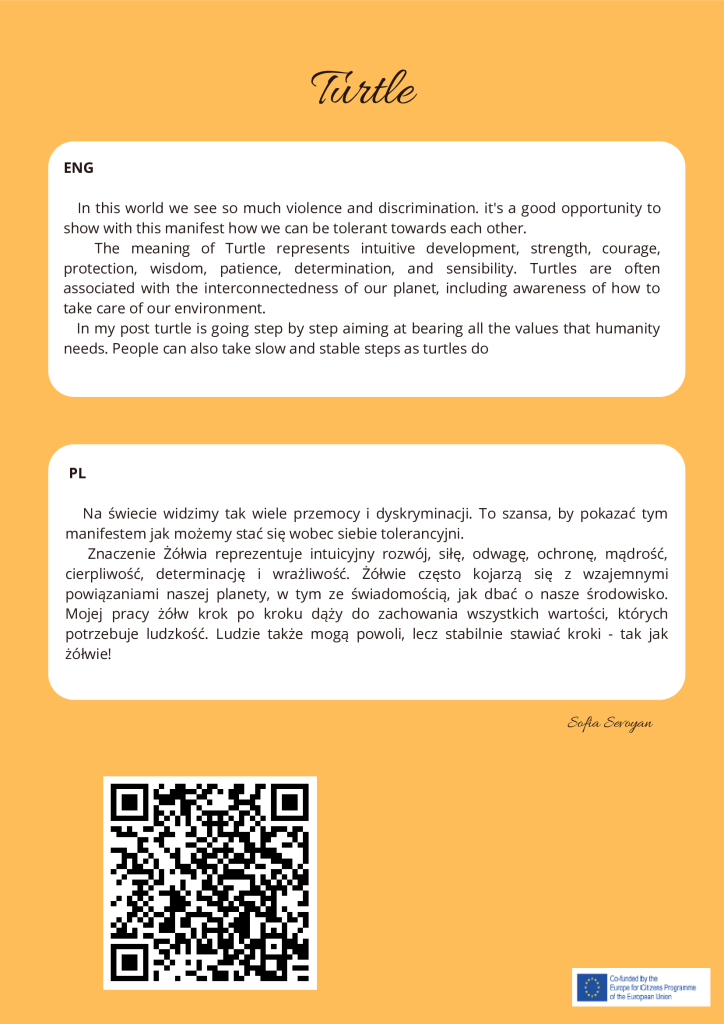 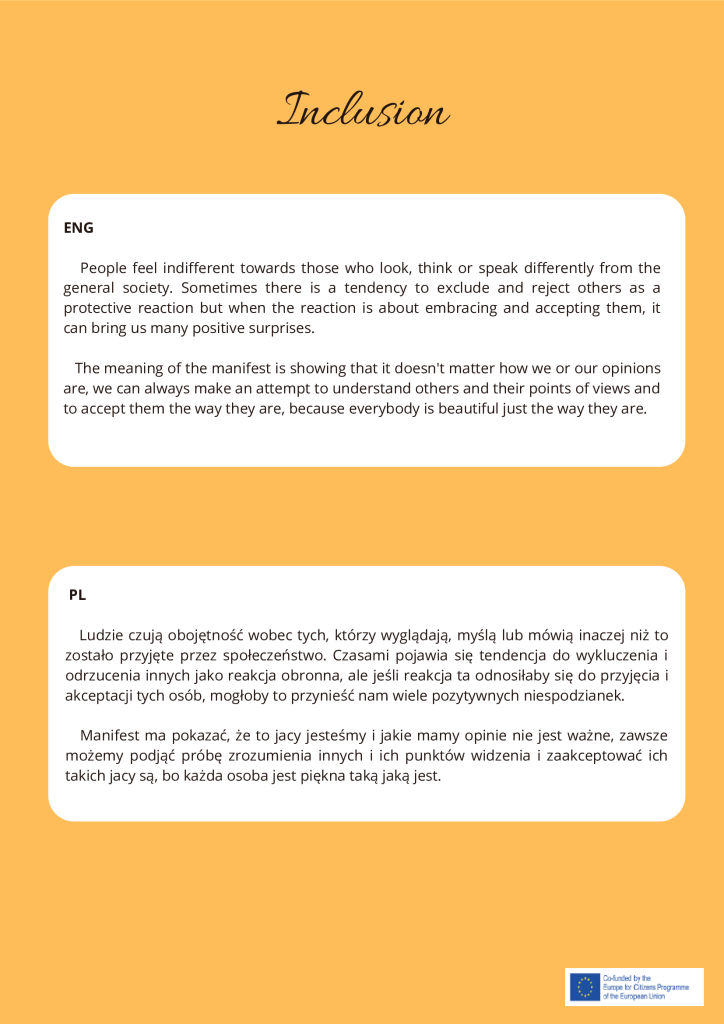 The third Remembrance Week took place in a village close to Vienna, Austria, from the 14th to the 23th of June 2021. The two main topics of the week were nationalism and propaganda with which the participants produced two infographics. One infographic provides information on how far right movements communicate while the other deals with the Nazi persecution of homosexual people during the holocaust. 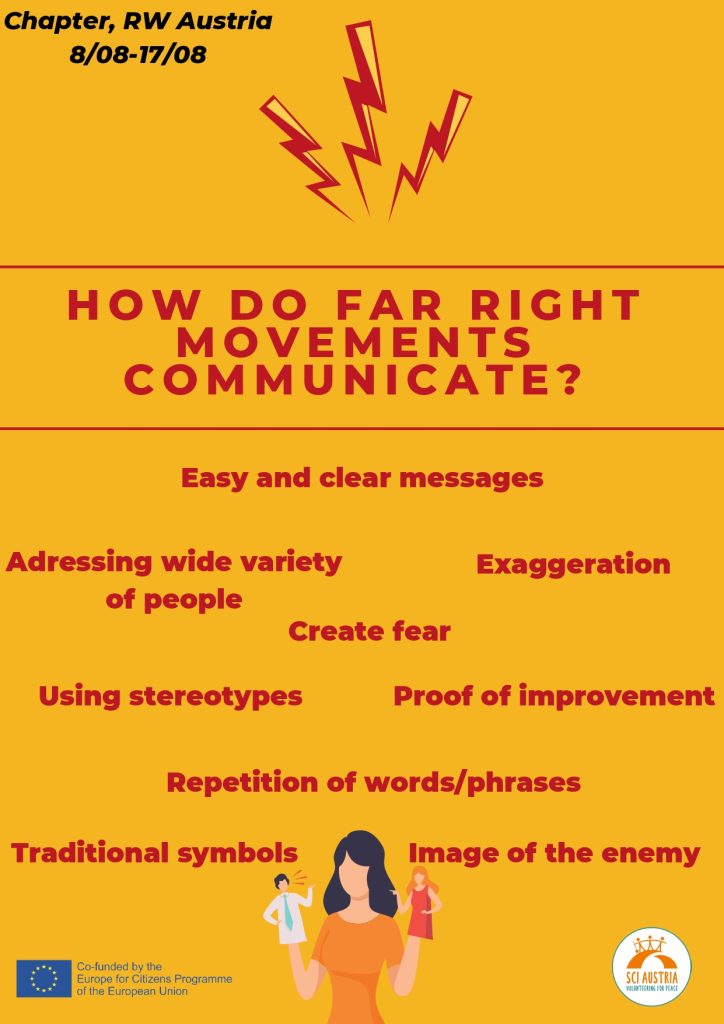 From the 29th of August until the 7th of September, the fourth Remembrance Week took place in Athens, Greece. As a result of this week, the participants have created three infographics with information on several topics including Neonazism in football, use of violence and facist propaganda in the media. For example, the first infographic identifies varous symbols used by facist and nazi groups also in relation to football.

The last Remembrance Week lasted from the 23rd of September until the 3rd of October and took place in Barcelona, Catalonia. The output of this Remembrance Week resulted in three infographics concerning the issues of populism, gender and exile as well as a reminder of critical thinking to prevent becoming victims of propaganda. 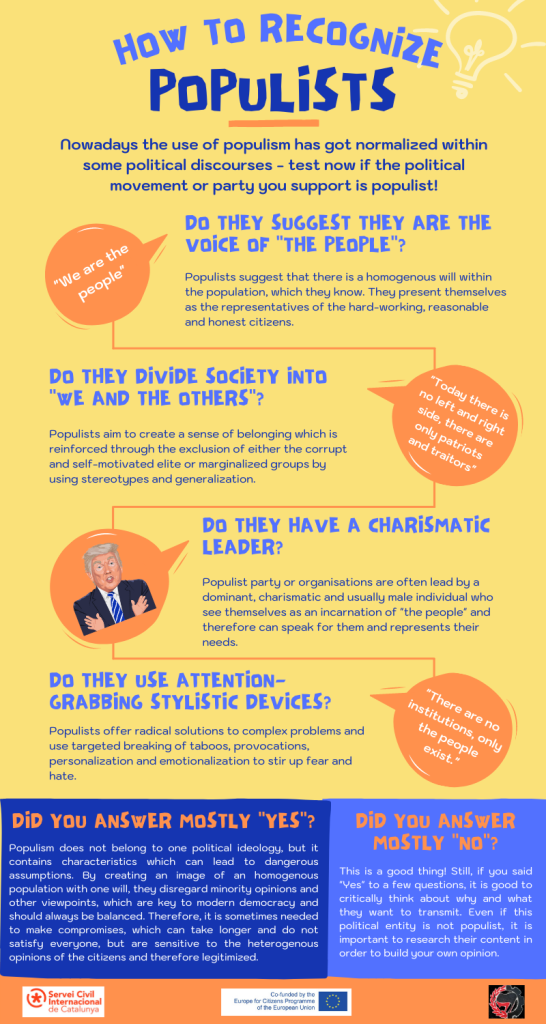 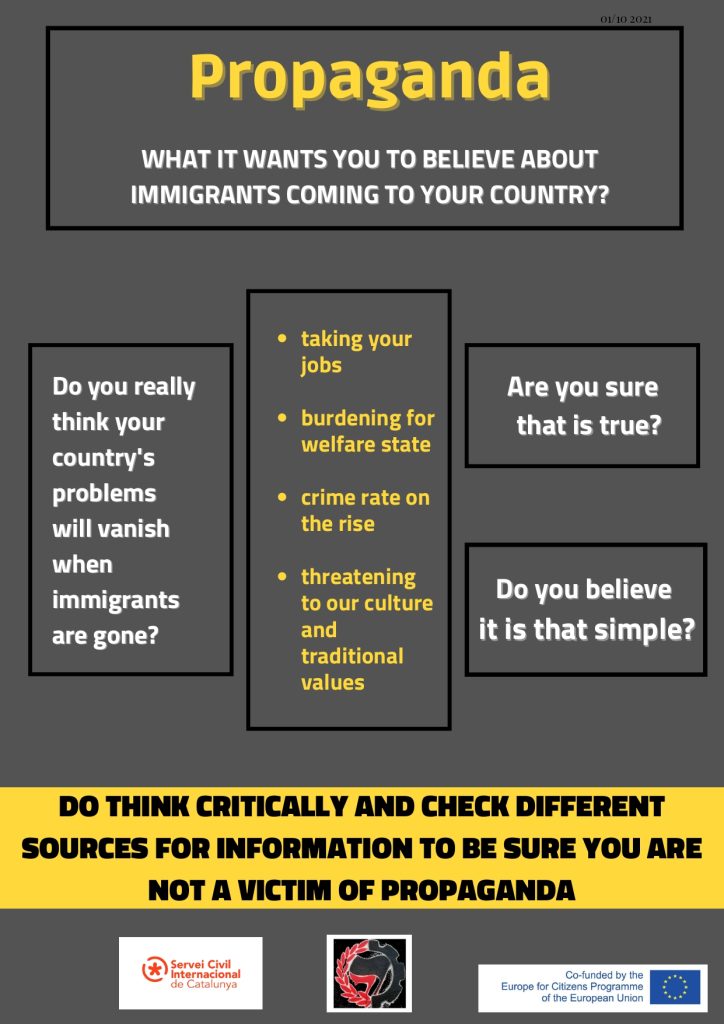 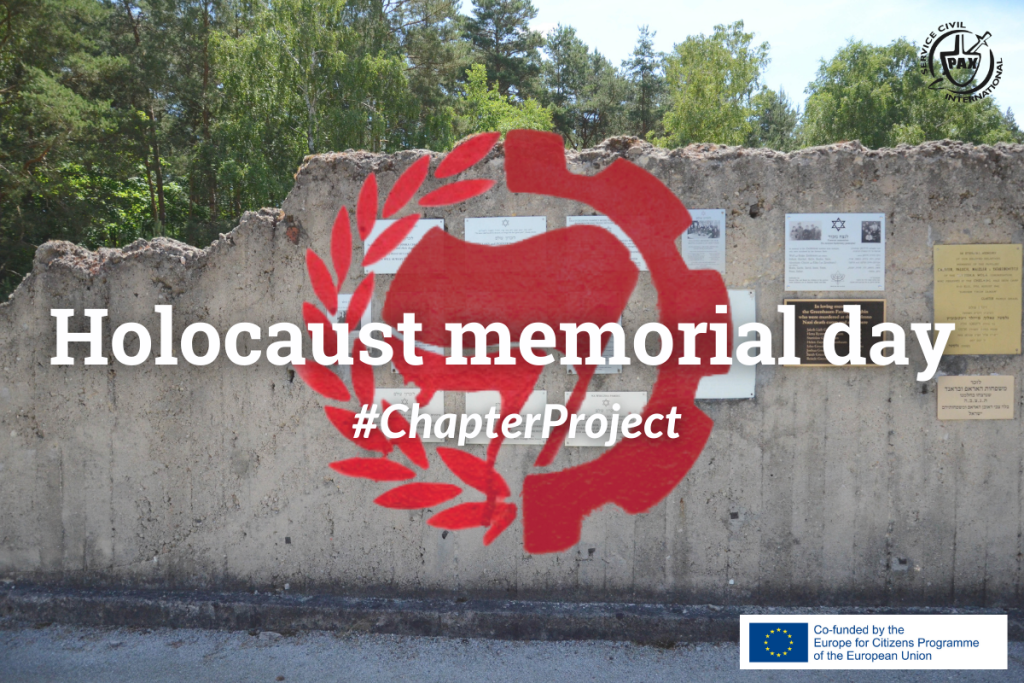 Today, the 27th of January, we are launching the last part of our campaign for the project CHAPTER: Challenging Propaganda Through Remembrance carried out by Servizio Civile Internazionale Italia in partnership with 11 other Italian and European associations. During the last year, dozens of volunteers from all over Europe have gathered both online and in presence to research, reflect on and enhance the role of resistance and international anti-fascism also with contributions from activists, historians and academics.
Launching our campaign today has not been decided randomly. Because on this Holocaust Memorial Day we want to remember that Nazi-fascism is not extinct. On the contrary, it has taken several forms and still reaps numerous victims about which little or nothing is being said.
The Holocaust Memorial Day should, in our opinion, be used to reflect on the practices of solidarity, anti-racism, anti-fascism and anti-sexism – especially in a historical phase in which heterosexual white supremacism and racism continue to pose a severe threat around the world.
Starting from today and for the next month, we will give space to different voices that will bring us the direct testimony of anti-fascist commitment in several corners of the world. We are starting with some testimonies by the historians: Davide Conti and Elia Rosati in order to discuss the meaning of the European experience of Nazi-fascism and of the subsequent developments of radical right-wing actors as well as to highlight the political value of resistance and anti-fascism.
You can watch their testimonies through this link!
admin Uncategorized February 4, 2022April 22, 2022 0 Comment 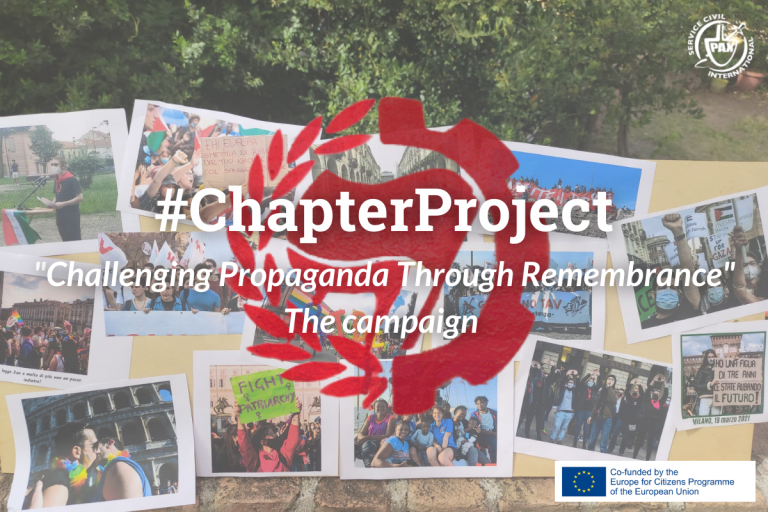 Welcome to CHAPTER: Challenging propaganda through remembrance – the campaign. During the next weeks, we will use this platform and the social networks to share with you the experience and findings of the project:

Hate crimes include all acts of violence perpetrated against people based on ethnicity, religion, sexual orientation, gender identity or physical disability. Discrimination becomes the reason of the crime. 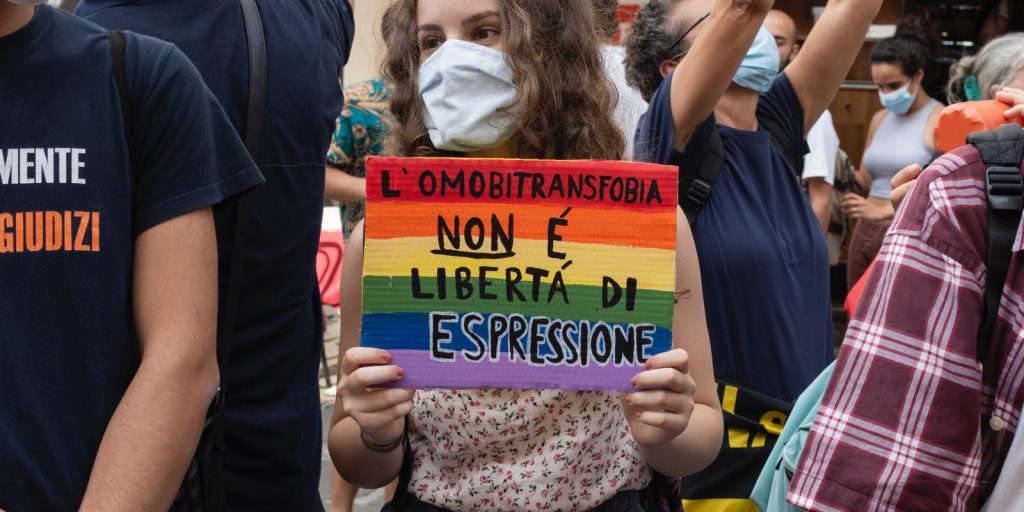 In Italy, on May 2nd 2018, the deputy and LGBT activist Alessandro Zan presented a law “Ddl Zan” aimed at combating discrimination based on sexual orientation and gender identity and provides for specific aggravating circumstances for hate crimes against homosexuals, transsexuals, women and disabled people.

This law has immediately sparked criticism from the fascist movement Casa Pound, but instead was supported by the anti-fascist association ANPI.

Casa Pound states that the Ddl Zan is unconstitutional because it defines it as a law that would limit freedom of expression and could legitimize paedophilia. For this reason, CasaPound organized demonstrations throughout Italy against this law.

The fascist movement believes that the Italian LGBTQ + associations that support this Ddl Zan are not representative of Italian society but are only interest groups and that their only obvious goal is to silence any opposition voice.

Instead, the ANPI proposes propaganda in support of the Zan law and it participates in the Pride Month events in Italy.

According to this anti-fascist association, this law is essential for reasons of rights, but also to counter the violent discrimination present in Italy and episodes of physical aggression.

It therefore stands in contrast to the intervention of the Vatican which would like to propose a change to this law and condemns the anti-LGBTQ law approved in Hungary.

In conclusion, it is very interesting to note how fascist propaganda is used to promote hate crimes by justifying them as “freedom of expression” and by accusing anti-fascists of silencing all forms of opposition, while anti-fascist propaganda tries to counter hate crimes and defend rights of all human beings believing that discrimination cannot be defined as freedom of expression. 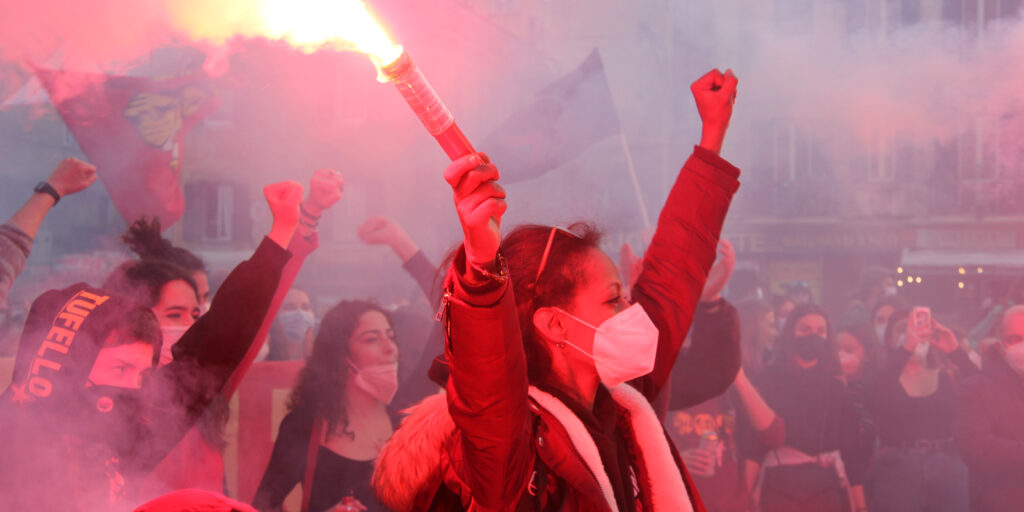 “Adolf Hitler was a martyr. And like many martyrs, he brought extreme visions with him”
(Ezra Pound’s statement in the twentieth century) 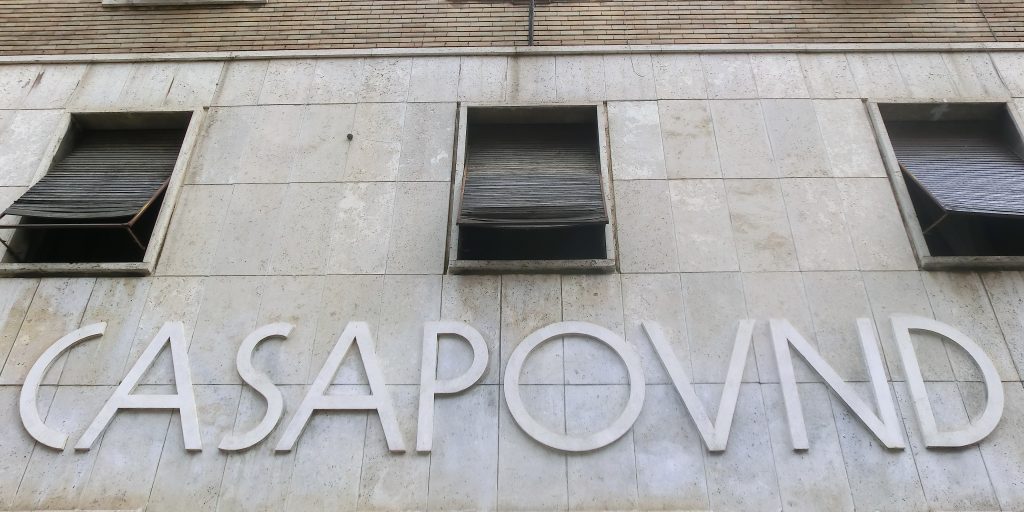 CasaPound is a far-right political movement, with a neo-fascist and populist matrix, which is born in Rome in 2008 with the aim of reviving and implementing the fascist ideology.

The mobilizations and initiatives of CasaPound started in Rome and then spread throughout Italy, thus connoting CasaPound as a real political party that ran for electoral competitions until June 2019.

This new fascist movement takes its name from Ezra Pound, an American poet of the period of the two World Wars, who lived mostly in Europe supporting the fascist ideas of Mussolini. He is idolized by CasaPound because he sacrificed his life to fascism and for this reason he was captured by the partisans and interned in a criminal hospital by the Americans after the end of the Second World War.

CasaPound, like many neo-fascist groups, bases its propaganda on historical revisionism by portraying the fascist society of 1920 in an idealized and preferable way compared to the democratic systems of today (Ezra Pound describes democracy as a system that benefits those who are already rich and in power).

It is also interesting to note that CasaPound is present in the major social channels, such as telegram, twitter, facebook and youtube and has its own radio called “Radio Bandiera nera” to propagate the lines of conduct that characterize it: ultranationalism, white supremacism, xenophobia and opposition to immigration.

In the field of communication, CasaPound goes further: a 2016 journalistic investigation documents a manipulation of Wikipedia by Casapound which began in 2011 to improve its image, eliminating negative elements or facts that referred to this movement.

In 2006 CasaPound set up its own student organization as well as the fascist movements of the past. Indeed, fascist university groups existed as recruiting channels for the fascist party, and for several years they were the only source of new party members. Mussolini proclaimed that the purpose of university groups was to inspire young people to conquer and command.

Lastly, Casapound dialogues at an international level with various European and world far-right organizations: in Greece, it has relations with the neo-Nazi party “Golden Dawn” and in Spain with the neo-Nazi movement “Hogar Social”.